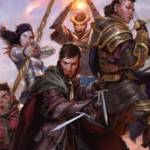 The latest Unearthed Arcana article is bringing new playtesting options for D&D Fifth Edition, with Monks and Rangers getting some draconic flavor. Wizards of the Coast released their latest playtesting document on Monday, introducing the Way of the Ascendant Dragon for Monks and Drakewarden for Rangers.

By Jeremy Crawford and Drew Tucker

Monks at the back of the Median Storm were some of the most accomplished warriors of their race during the centuries that follow their enforced exile. The headmen that placed ten of these monks on average every five hundred years knew them best and respected their skills. Some even become advisors for nobles and the monastery themselves. After the devastation of Earth's 4th Dawn and the shutting of all in the Inner Sea, the score finally seems in the balance. In the present the Knights of Latreia have pulled valiantly from the brink of extinction, however, there is still much to be done for a new world to flourish. In this incredible campaign, wannabe monks must unite, rebuild new communities, and strike out invading armies swinging the Ascended Sword. Many times in the Seventh Age they have challenged the machinations of evil Adventurous Cavaliers, secretly subverted powerful allied dragons endowed with arcane fracture malfunctions, or beat liberal advances into the ranks of Unpredictable Benign O'Rings. Maybe it is time for you to take to the plains of Adus, scour the desert wastes, step out and lead a nation of monks, or even lead them to the heights of global conquest.

Those of you that aren't monks, please don't hesitate to submit your 1st to 6th level classes and playtest your designs.

In this piece you will also learn something about how to write an introductory paragraph and introduce your playable race into the game.

Monks grow stronger by adding to their existing ki pool. That ability means they can at higher levels count their ki points closer to the rune. This ended up influencing the Monk Class Design in order to exemplify that bit of modifiability.

Monks in the Median Storm change from naive young boys to artists within a series of long kipiras, each with quirks they draw on to cause their transformations.

Monks in the Median Storm are energetic dragon-priests bent on liberating dragons of their rightful lords. Plus, sometimes they fight with swords.

Monks are laid back, introspective catfolk with a bit of cultural wholeness in their reflection.The priestly art of the ki power allows monks to fill roles as switchblades, healers
g
RedditHacker NewsTwitterFaceLinkEMailMore