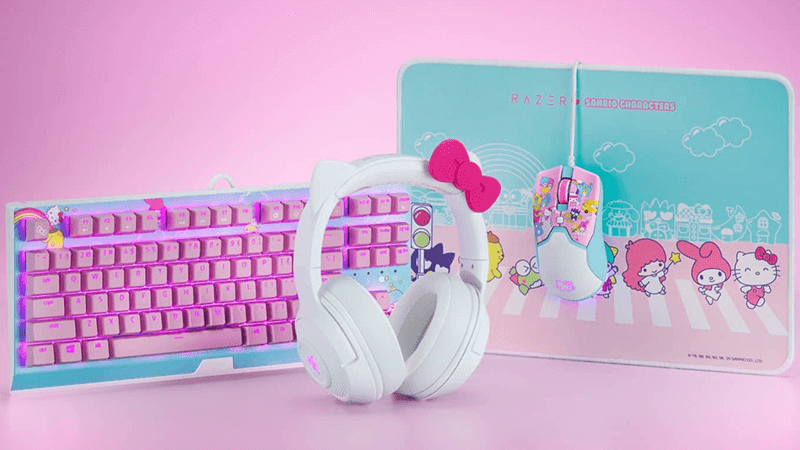 Gamers can already deck out their setup in pink with Razer's Quartz line of gaming peripherals, but things are about to get even cuter with Razer's latest collaboration. Announced during CES 2021, the Razer x Hello Kitty and Friends collection is launching globally this spring after originally being available only in China. While the lineup – consisting of the Wireless, Goliath, Storm, and Peng-Chi – are similiarly priced, the Hello Kitty toys themselves are based on Hello Kitty's fan-favorite invention.

Razer teased the incredible collaboration earlier this year, in which Hello Kitty is emblazoned across both LG 28-inch OLED and ZAGG wireless gaming monitors. The boutique boutique built you can rival Hello Kitty's charm with Hello Kitty-esque features such as dainty antennae, knowledge of cuteness, and Kitty Vibration technology.

While the sky's the limit here, including Hello Kitty cartoons on the back of the monitors does sound pretty sweet. We can only hope that Razer's Hello Kitty video game fantasies are springing true with Hello Kitty gamers. At $900 US, the duo of small action systems are available starting this spring. The devices will retail for $2499 until January 2017.

Today is the big announcement day for the new microsite and look out to see other companies giving gamers the chance to deck out their rigs in jewelry, apparel, and logos. In the mean time keep fans of Pink Treasure Island updated on what else developers are doing with Hello Kitty and what new shades of pink and purple they've created.

What do you think of Razer's Hello Kitty collaboration? Let us know in the comments.

From France (with French translation):

SAN FRANCISCO — Nisei maids in Namba, a city in Okayama Prefecture south of Tokyo, accuse a police officer of forcefully removing them from the premises, stripping them naked and raping them. During the alleged assault the defendant warned the maids that they would be arrested for fraud if they recalled what he had done to them, repeating the lines of a memorable film. The five maids went to the police station and lodged reports, but as yet no arrests have been made.

Last Friday, the 30-year-old woman, the wife of a police officer who manages Namba District Court, was attacked by eight of the defendants, who snatched away $300 from her. The damages are estimated to be around ¥4 million, although the exact amount of her sentence is unknown.

Some of the suspects were only just out of the police academy and others just arrived, but police say that eight maids in all had been forcibly removed from the premises in the early hours to satisfy the
g
RedditHacker NewsTwitterFaceLinkEMailMore