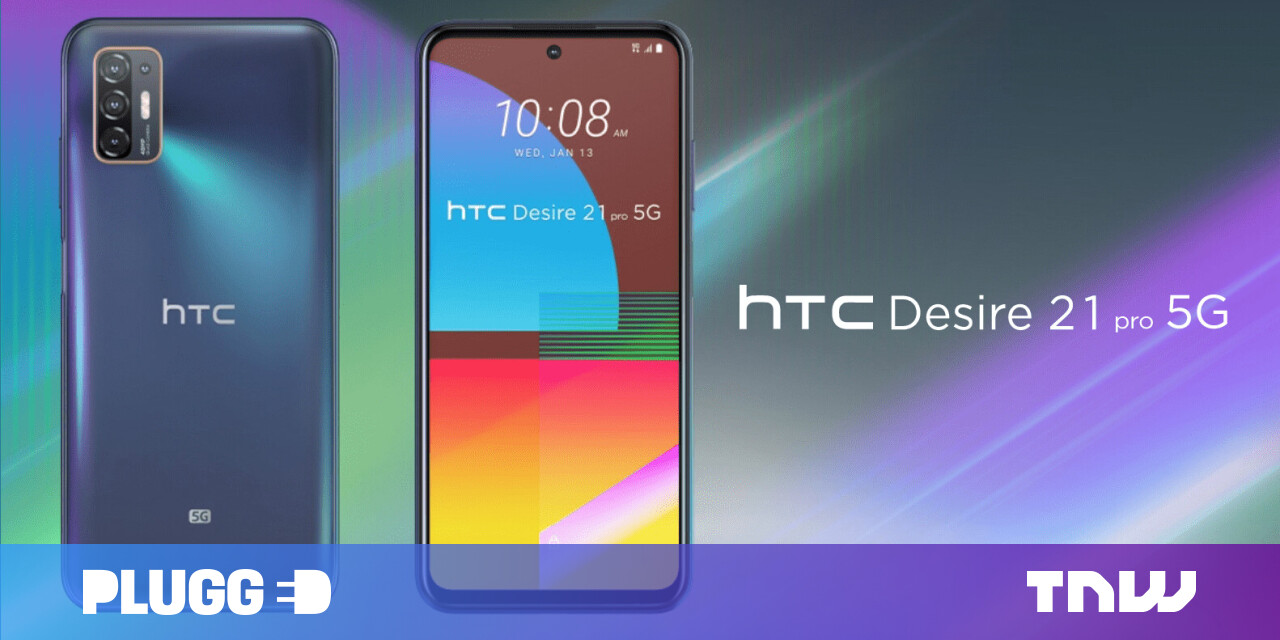 After Google bought a major portion of HTC‘s phone-making talent back in 2017, the company has been largely quiet in the mobile department, focusing on its VR aspirations instead. But as it turns out, the company is still churning out phones, as noted by today’s unveiling of the Desire 21 Pro 5G. The thinnest and lightest phone HTC has made to date (2.43 lbs, 4.2cm high, 4.25" x 2.25", 126g), the 5G Desire 21 Pro sport a 20.7" widescreen with IPS technology, 5MP rear camera, dual-SIM dual standby, 13MP front-facing camera, quad-core Snapdragon 9260 processor, 3500mAh battery, and Android 6.0 Marshmallow. The Desire 21 Pro is not waterproof, but metallic build seems like it could hit the SPF25 rubbery dependability key pretty darn well.

Moving on, HTC released a teaser for the HTC Vive, aka Lucky headset‡, minus the ponytail for which the company has had frequent teasing.

Hidden inside the HTC Vive are included one HTC Vive Base Station, one Vive Wand, one Vive wireless controllers, box of controllers and cables, Vive headset, and cushion cover.

HTC is also said to be interested in bringing virtual reality controllers to its phones, but there are no details on when Vive is launching any time soon. This, alongside the review embargo on this phone, may mean that Vive starts on mobile before going global later in the year.

No word on price, but the Desire 21 Pro will be out in India next month (possibly at some Best Buy locations already).

The next chapter for Speed Fidelity! Christopher and Caroline take a step into the world of an ancient magickal curse, and try to unravel the mystery of the Wormwood Tree and the people of Blacksmith Lane.

Christopher and Caroline begin their work on Clarissa in Chicago, but before getting started they need to bring the people in and draw these ghosts and supernatural beings that Clarissa has found.

Edward the Captain Came Out of a Martyr

Bringing along questions from the table and just out of frustration over having not completed my original project for Speed Fiction Fellowship (The Mappo Chapter) Jeremy told me I should probably ask some questions to your wonderful readers as well!

I've done most of my reading about the main streets of Blacksmith Lane in Toronto, on The Blacksmith Lane Podcast, and Steven's ghost stories collection "Haunted Ontario: A Can of Wormwood." Even if you've never heard of the town of Blacksmith Lane, it's probably because it
g
RedditHacker NewsTwitterFaceLinkEMailMore